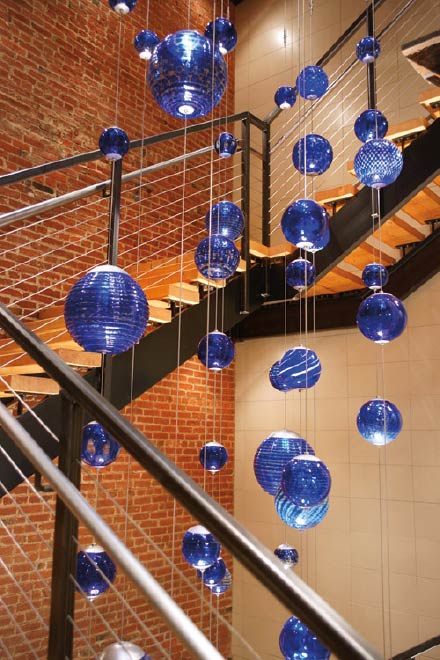 COMMITMENT TO THE ENVIRONMENT

After a 1998 general alarm fire at the abandoned former Sunshine Biscuit factory across the street, which nearly engulfed the Faultless factory, Faultless was at a crossroads. Should Faultless move to the problem-free ‘greenfields’ of suburbia? Or should it dig its heels in and remediate the brownfield’s (blighted) areas surrounding the factory neighborhood, where it had been producing consumer products since 1887? And if Faultless decided to stay, how could it defend itself against the blight and pollution caused by near-by abandoned structures? Faultless decided to stay in its current location and serve as model for other industrial companies.

Consolidating a Site and a Vision

Faultless owners and managers, and their engineering and architectural partners, conceived “The Faultless 8th Street Plan.” Using the existing manufacturing plant as a centerpiece, the plan called for assembling near-by brownfield’s real estate sites, and relocating Faultless office workers to the campus from another part of the city. Additionally, Faultless would relocate its warehousing operations to the campus by building a new warehouse on the acquired burnt-out Sunshine Biscuit site, across from the plant; and sell other warehouse facilities in other parts of the city. Local leaders, who were eager to retain jobs in the downtown area, quickly endorsed the plan, and offered other public-private partnership initiatives to support the project.

Faultless also embraced a secondary mission – one of team building. In executing The 8th Street Plan, all the associates who worked for Faultless in the region would come together in a single complex, which could spawn an exchange of innovative ideas among co-workers – all while cleaning up a neighborhood that had been besieged by floods, fire, underground chemical pollution, asbestos, lead paint, antiquated sewers and infrastructure, crumbling bridges and other problems common to older urban manufacturing areas.

Faultless Brands is located in the oldest section of Kansas City, Missouri, USA, which since Lewis & Clark, has been regarded as an ideal commercial distribution point, being near the geographic center of North America; near the confluence of the Missouri River and the Kansas River; and served by major rail lines and highways.

The district has also been known as the Town of Kansas, the French Bottoms, the West Bottoms, and the Stockyard District. This location helps the company efficiently import raw material from America and around the world, and export finished goods.